Title: Attack of the Movies 3D
Publisher: Majesco
Platform: Xbox 360
Genre: Shooter
Release Date: 5/20/2010
Overview:
NOTE:  3D glasses will not be included with rental of this title, but will be included with purchase. This game is playable without the 3D glasses.

Step into the shoes of a Hollywood action hero in this groundbreaking shooter that lets you battle some of the biggest beasts and most fearsome enemies ever seen on film. Attack of the Movies 3D sends you to six movie-inspired worlds where the action literally leaps off the screen. Put on your 3D glasses and shoot your way through environments teeming with zombies, giant bugs, alien spacecraft, and robot warriors. In each level, you’ll use weapons specially geared toward blasting whatever enemy you’re up against. Arcade-style multiplayer lets you invite three friends to share some screen time. 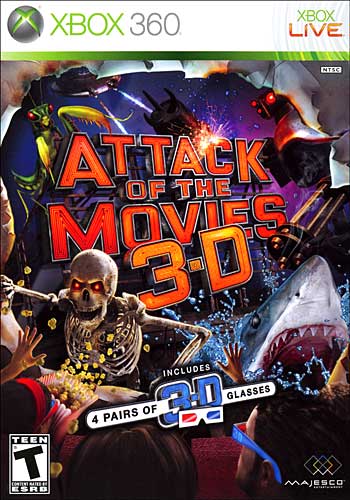