Title: Split/Second
Publisher: Disney Interactive
Platform: Xbox 360
Genre: Racing
Release Date: 5/17/2010
Overview:
Contestants on this reality show are not voted off. Instead, they’re derailed, flattened, crushed, and flat-out blown up! Try to survive 24 episodes of this rigged-to-blow racer set inside a smash-hit international reality TV show. Compete against elite drivers for a shot at fame and fortune. Can’t shake the competition? Let the city do it for you. Strategically crash into structures, objects, or buildings to trigger explosive, Hollywood-style collapses and bury your opponents – or carve a new path through the course. Be careful – mess up the timing and you’ll bury yourself. The entire city is yours to destroy in solo, two-player split-screen races, and eight-driver online showdowns. 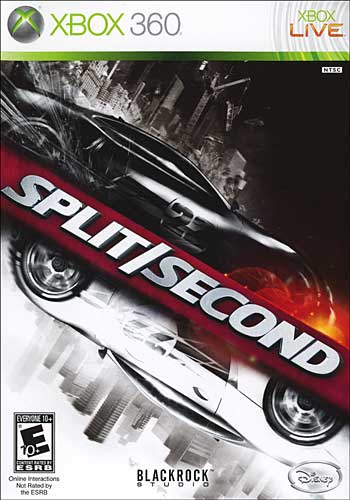