Title: Spore Hero Arena
Publisher: Electronic Arts
Platform: Nintendo DS
Genre: Strategy / Simulation
Release Date: 10/5/2009
Overview:
Heroes aren’t born, they’re made in this galactic battle! Create your own Spore Creatures for the first time on DS in Spore Hero Arena. Build 3D Spore creatures and send them into battle against an evil force that’s threatening the entire galaxy. Fight all kinds of Spore battles, including team battles, giant creature skirmishes, and battle royales. Explore planets across the galaxy, complete quests, and vanquish your enemies to earn parts to improve your Spore. Track the Creatures you encounter or collect them to trade with friends through the Sporepedia. If your hero is the mightiest of all, you’ll become Galactic Champion and save the galaxy! 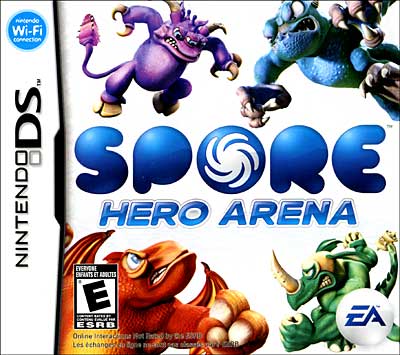