Title: Katamari Forever
Publisher: Namco
Platform: PS3
Genre: Arcade/Puzzle
Release Date: 9/22/2009
Overview:
You’re the Prince of All Cosmos. Your father has lost the stars (again), so he’s sent you to collect enough things to create new ones in this sequel to the truly unique Katarmari Damacy. To rebuild the stars, you’ll collect objects by rolling over them with a ball called a Katamari, which will collect anything it’s big enough to hold. Katamari Forever takes the smile-inducing play of the original and adds more of it, giving you a bigger landscape to roll on and more objects to pick up. At first, you’ll pick up tiny objects like thumb tacks, but keep rolling and eventually you’ll grab things as big as a skyscraper! 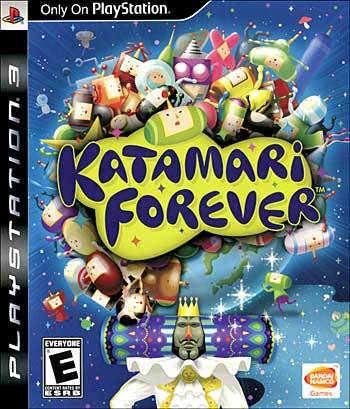