Title: Ratchet & Clank Future: A Crack in Time
Publisher: Sony Computer Entertainment
Platform: PS3
Genre: Action Adventure
Release Date: 10/28/2009
Overview:
Is this the end of the line for the universe’s greatest duo? When Clank is kidnapped as part of the latest evil plot by Dr. Nefarious, the two are in for an action-packed fight to reunite. They’ll battle to get back together, but could it be possible their destinies aren’t actually linked? While their future is uncertain, the duo’s arsenal holds plenty, including new, customizable weapons, and lots of them. Use new gadgets like Ratchet’s hoverboots and new powers like Clank’s nifty new ability to shift time. The non-linear levels unfold with high-impact graphics that feel like you’re playing your own CG-animated movie. 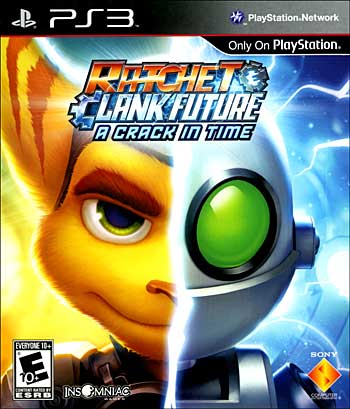