Title: LocoRoco 2
Publisher: Sony Computer Entertainment
Platform: PSP
Genre: Arcade/Puzzle
Release Date: 2/12/2009
Overview:
The evil king Banmucho has returned with his race of Mojas, and you must take control of the Locorocos to save your planet! You’ll control the face of the world using the shoulder buttons of the PSP to tilt and roll your blob-like Locorocos around. All-new environments await you, including underwater and inside a gigantic penguin, where the angle will change depending on when the penguin decides to stand up! Several clever minigames will keep your interest up, including a kitschy 2D shooter, a rhythm minigame, and a whack-a-mole variant where you’ll hit little creatures as they pop out of the ground. It’s colorful, it’s cheerful, and it’ll keep you bouncing for hours! 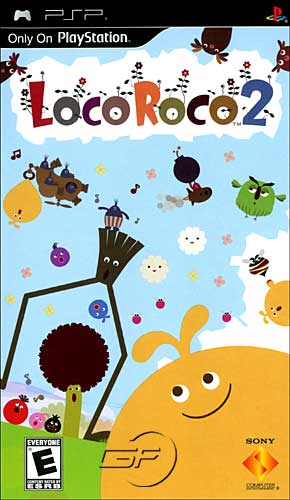