Title: Dynasty Warriors 6: Empires
Publisher: Koei
Platform: PS3
Genre: Action Adventure
Release Date: 6/24/2009
Overview:
The Han Dynasty is falling. Three rebellious states are moving to overthrow the Emperor. Choose from one of 41 different playable heroes and defend your leader! Use spectacular and unparalleled fighting moves to destroy entire units of enemies at a time. All new weapons and moves await you, as does the never-before-seen Musou Mode. 45 scenarios return from the original, as well as 5 new stages and 10 new scenarios to battle through. All of the fighting techniques are beautifully motion-captured for realistic and fluid action. Drop into the beautiful and mystical land of ancient China and destroy thousands of advancing soldiers with lighting-fast combat! 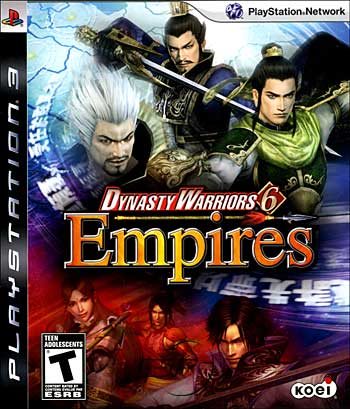