Title: Tom Clancy’s End War
Publisher: Ubisoft
Platform: PSP
Genre: Strategy/Simulation
Release Date: 11/6/2008
Overview:
It’s here. The battle to end all battles, the war to end all wars. World War III. And you must lead your army to victory! Choose your faction from: The U.S., known for its aerial dominance and ground power; Russia, with heavy weapons and demolitions at its disposal; and Europe, capable of speed and high-tech attacks. Decide what type of battalion you want to lead – airborne, technical, or mechanized. Then, engage the enemy in the online Theater of War. Each day, your faction’s victories and defeats will be tallied. After a one- to three-week campaign a winner will be declared, and the war will start all over again. 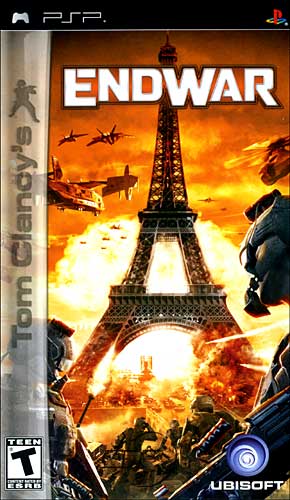