Title: Nicktoons: Attack of the Toybots
Publisher: THQ
Platform: PlayStation 2
Genre: Family/Party
Release Date: 10/26/2007
Overview:
It’s toon vs. toon in this Nicktoons battle of good vs. evil! The diabolical Professor Calamitous is up to his usual nasty tricks. And this time the Nicktoons may have met their match! That’s cause they’re up against evil robot versions of themselves, created by the Professor. Play as 11 favorite Nicktoons characters, including Jimmy Neutron, SpongeBob, Danny Phantom, Timmy Turner, and Tak and stop the robots before it’s too late. Explore five Nicktoons worlds, from Bikini Bottom to Amity Park and beyond. Level the playing field against your robot foes by using mechanical suits equipped with upgradeable weapons, and show off your character’s unique abilities in special Hero Zones. 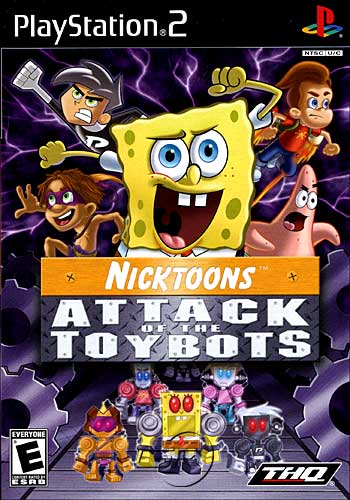