Title: Wallace & Gromit: The Curse of the Were-Rabbit
Publisher: Konami
Platform: Xbox
Genre: Family/Party
Release Date: 9/29/2005
Overview:
Something wicked this way hops! Inspired by Wallace and Gromit’s first feature film, Curse of the Were-Rabbit takes players of all ages on a zany, cooperative adventure. The annual Giant Vegetable Competition is coming, and hungry rabbits have their eyes on the prize. Wallace and Gromit head a humane pest-control operation, “Anti-Pesto”, to keep the contenders safe. They get more than they bargained for when a gigantic vegetable-munching beast starts devouring the exhibits. Choose any pairing of Wallace, Gromit, and their rabbit pal Hutch. Freely explore four areas and fend off the ravenous beast! Gameplay is sprinkled with humor and visuals from Wallace and Gromit’s wacky world. 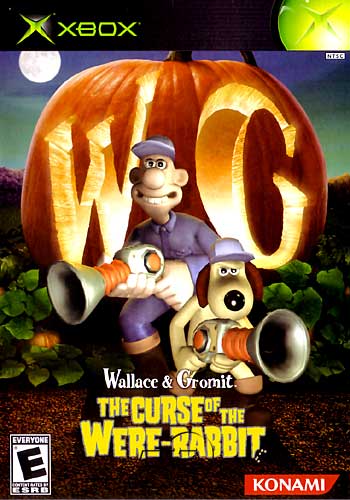