Title: Worms 3D
Publisher: Sega
Platform: Xbox
Genre: Arcade/Puzzle
Release Date: 3/2/2005
Overview:
Moving from the 2D format of past classic Worms titles, Worms 3D adds another dimension to demented Worms warfare. Playing now in first-person, third-person or bird’s eye view, you can now engage in battle in a more intuitive and immersive manner. As usual, the environments are randomly generated and entirely destructible. All the humorous weapons are also here, including flying sheep, exploding moles, holy hand grenades and mad cows. Only this time you’ll have the added challenge and delight of using them in a 3D environment! Using those weapons can be tricky, and friendly fire and sudden turns of fate make for constant surprises and laughs. There’s no better way to blast and vaporize your buddies than in this thoroughly entertaining and addictive franchise! 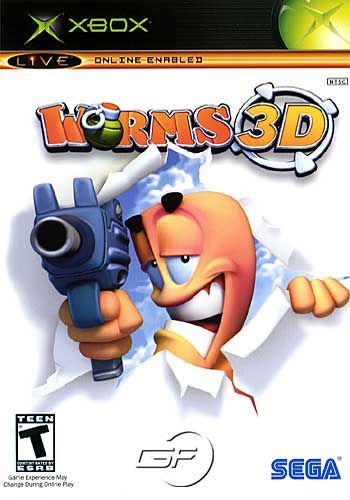